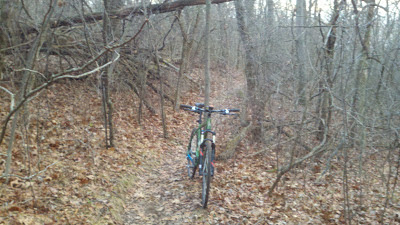 I don't why it took me three weeks to take advantage of work moving so close to kettle moraine, but I finally rode over after work today.  It took less than 30 minutes to ride over, and if I wanted to I could have driven it in 10 minutes.  Its a nice road going over there too, busy enough that no one lets their dogs roam free, and the speed limit is 45 so cars aren't blowing by.  It sure is nice being so close to 30 miles of single track, I know where I will be spending most of my summer nights. 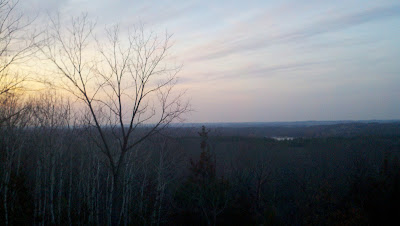 This view is what I was trying to get to before sunset, the picture really doesn't show how nice it is.  I'm surprised I didn't run into anyone else out there doing the same thing, but I suppose it is pretty far from any parking lots so maybe walking or riding back in the dark isn't for everyone. 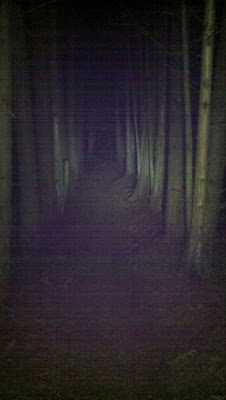 I'm getting more used to riding at night, it's tougher than I thought.  Especially when you combine riding at night and in the cold.  Tonight was a really nice ride though, 42 degrees was nice, and riding through the woods is better than the road in my opinion.  The hardest part for me to ride at night is that there is nothing to look at, all I've got is this little beam of light in front of me and lots of pedaling.

Tuesday night was tough and cold.  My shifters weren't working because I lubed them with too thick of a lube and they get gummed up when its cold.  I could shift up but not down, so I ended up single speeding it.  Then my water bottles froze. When I got back I noticed my time was remarkably slow.  Having such a good night with 2.5 hours of riding tonight really made up for it.  Don't get me wrong, the Tuesday was still fun, it was just not as fun as some rides.

I'm going to put some miles in this Sunday, nothing crazy just a good amount.  Depends what bike I ride, but it will probably be 4 hours either way. Let me know if you'd like to join.