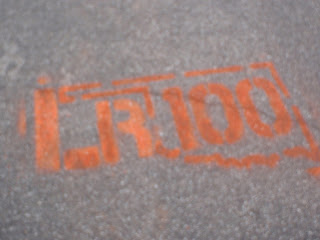 Last fall, my buddy Mike told me to check out the Land Run. At the time it just seemed like a normal 100 mile gravel race, but I had never ridden in Oklahoma before so I said “sure let’s do it.” I maintained that same carefree attitude all the way till race day. I simply thought it will not be as bad as some of the other races I have done. 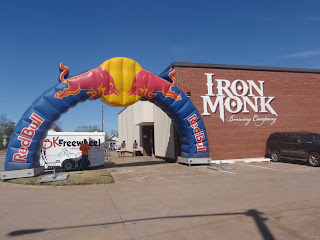 We drove out overnight and arrived Friday morning. We went into town to check out the bike shop and waste some time. The shop was not open yet, but Bobby the race Director was outside the shop talking to a couple on bicycles. We said hello and kept walking, till Bobby recognized Mike’s “gravel jesus” shirt. “hey! You guys know Jay? Where are you from?” we instantly noticed that Bobby had a crazy amount of energy. He kept that excited energy all weekend long. He treated every person like they were the most important person in the race, and was so happy to see everyone.

Mike and I were exhausted and bickering like an old married couple. So we went back to the hotel to get our room. Unfortunately it wasn’t ready yet. So we slept in the parking lot. We woke up, went to lunch and finally our room was ready. I went up and took a nap again. 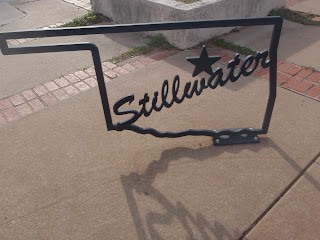 There was a group ride / pre ride scheduled for 3pm so we headed back into town on our bikes to check that out. The gravel was dusty and fast, confirming my pipe dream that Saturday was going to be easy. 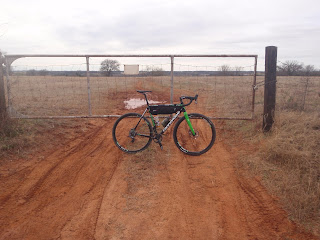 Overnight we got some rain, but by the time we woke up the parking lot was nearly dry so I figured the gravel would soak it up no problem. I had my entire day of food planned out and organized. Mike laughed at me for it, grabbed his 20lb bag of candy and headed down town for a breakfast burrito.

It was warm and humid at the start, I was glad for that because I hate having to wear a jacket for the first half hour then have to carry it around the rest of the day. We were led out by a police officer in a suburban, who was blaring “Eye of the Tiger” through his megaphone. No joke.

The gravel started off in good shape, a little mushy but not bad. I was in the lead pack and we were cruising along pretty quickly. We were living it up for this first 15 miles or so till we came to the first sloppy up hill. I wanted to stay with the fast guys so I fought against the mud and hurt a little more than I wanted, but it worked. A small group was able to break away, that lasted for a few more miles till we hit the bottom of a hill and tried to power through again. The heavy sticky mud threw my chain off and I was buried. When my chain came off I tried pushing my bike only to have the mud grow around my tires and clog up everything to the point where the tires would not turn anymore. My pipe dream was over. 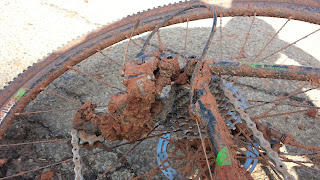 It took me a second to assess the situation. It was almost as if my head was shifting gears from this will be easy mode to don’t break your bike mode. I witnessed 4 derailleurs get sucked into the spokes of other riders bikes, and saw several other riders already on the side of the trail with same problem. I found a stick and cleaned my bike enough so it wasn’t as heavy and lifted it on my shoulder. 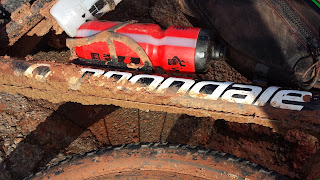 I jogged as much as I could, but kept a close eye on my heart rate to make sure I wasn’t over doing it. All together I would guess I carried my bike for about 2 hours. After that the roads would switch between good and bad until the 50 mile check point. 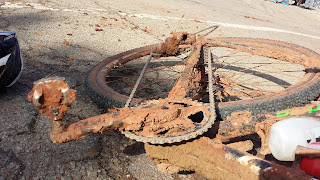 I grabbed my fresh bottles and left. I saw a hose was available to clean gears, but I didn’t want to waste any time. I regret that decision, because by the end of the race my bike sounded like it had a knocking motor.

Just after the checkpoint I met up with a guy from Colorado, his name was Mark. Before the checkpoint they said I was in 17th, but Mark and I were able to work together really well and we were picking guys off pretty steady. In fact for the last 50 miles of the race we did not get passed. By this point in the day the gravel was drying out and the only problem we had was wind, but since Mark and I were sharing the effort, wind turned into an advantage. Toward the end of race, Mark started taking longer and longer pulls. I was having a hard time staying on him then he finally dropped me. Good ride Mark. 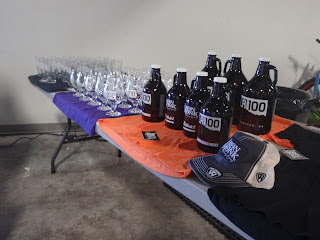 I rolled in behind Mark for 8th overall. To say I was pretty pumped would be an understatement. I was really happy with how the day went. My bike held together, I stayed hydrated, and I was able to push hard all day. I got cleaned up and got a “Big Pig”(pulled pork sandwich) from the big green truck along with a Land Run Ale and waited for Mike to roll in. 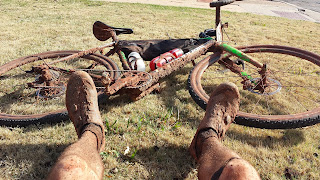 He came in exhausted, but finished and seemed pleased. His main concern was not pedaling the bike anymore and getting some food. Speaking of food, we ate like kings on this trip. First we stopped at The World’s Largest Truck Stop, which was not that great. Then we ate breakfast at a small diner in Perry, Oklahoma. Lunch was Mexican food, dinner was from the green truck(so good I went back on Satuday). Jack in the box, where Mike introduced me to deep fried tacos. Then finally on the way home we stopped at Trans Iowa favorite Tacopocalypse. 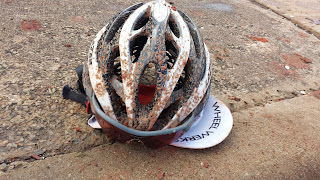 Would I recommend this event to a friend? Damn Right I would! 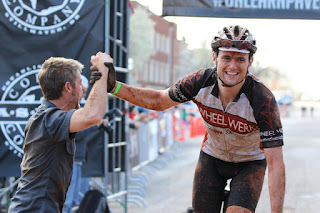