The first check point was a little less than 55 miles into the race and with 5 miles left to get there Schotz and Brunt took off.  They were still in sight, but they had a big gap.  I was jealous, but I had no reason to be riding the way they were.  They were giving it hard and only a couple hours into a 28 hour race.  But I was feeling good, and something inside me said… "Go!"  So I went!  I pushed hard and caught them.  Once I got there Chris looked back to see where everyone was and it was just me, the rest of the group was just barely in sight.  He was shocked to see me on a mountain bike keeping up with them, and said something along the lines of "atta boy" or "holy shit!" I wasn’t really listening to be honest.  I could hardly breathe!  Then as we came to town and the checkpoint, the road switched to pavement, a major disadvantage to my knobby tired mountain bike.  I refused to let them drop me, no matter what I was not falling back into the big group of riders. 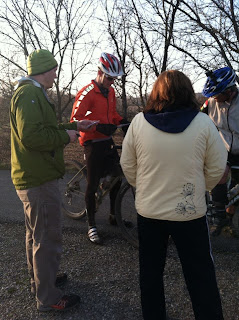 I was able to hold on until the checkpoint and I felt pretty good, then all that hard work went right out the window as we grabbed our new set of directions and headed down the bike path.  The sheet said in .03 miles turn left, the three of us were .2 miles down the wrong road before we realized something wasn’t right.  "Well maybe its supposed to say .3 not .03," someone said, so we went on further.  We all were in denial about what we had just done but the fact was we messed up.  So we turned around and gunned it some more.  All that hard work and we instantly went from first second third to 20ish spots back.  Oh well its just 5 minutes out of a 28 hour race. "stay positive."

We caught back up to the group, Brunt stayed back and Chris took off.  I stuck with the group never to see either rider again.  Brunt would later run out of water and stop at someone's house to try and refill, then get attacked by the owners dog and have to pull out of the race.  Schotz kept pushing like a man possessed long into the night, leading much of the race and being the first to the second checkpoint, only to drop out at 1am from cold and dehydration with 60 miles to go.

Me on the other hand got to the first gas station at mile 70 and knew I had to stop and refill.  I bought two paydays, a salty nut roll, a package of sour gummy worms, 2 gatorades, and a gallon of water.  I didn't waste any time and got back on the bike asap.  The sour gummy worms didn’t go down so well but for some reason later in the night they were great.  I left that gas station with a triathlete named Nick from MN.  He was a good companion but come to find out he was just using me because he lost his directions.

Later in the afternoon he and I came to the second gas stop and he had the great idea to go to the grocery store instead of the gas station.  That ended up being an awesome idea because the grocery store had a restaurant inside.  He ordered one hot dog, while I ordered a burger and fries.  We sat down for about 15 minutes and caught our breath and stuffed our stomachs. 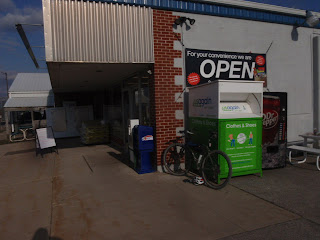 Later that night I made a quick stop at another grocery store to fill up for the long night ahead.  Also at the store was the winner of the female category.  Her diet was a little different than mine, she ate cinnamon rolls, a pepsi and two 5 hour energys.  She bought two more 5 hour energy for her back pocket.  I was pretty sure she would have a heart attack with all that energy but I was wrong as she ended up beating me by almost an hour and a half.  I ate some more junk food and packed my pockets with snacks.

Just before dark I pulled off to the side of the road to get my lights ready, add more diaper rash ointment, and put my jacket on.  While I was stopped a large pickup with a car hauler trailer on the back flew by and slammed on the brakes.  They started to back up toward me so I rode up to see "what's up".

Iowan: You need some help?
Me:      No I'm fine but I appreciate you stopping and checking.
Iowan: Oh you looked broke down, What are you doing anyway? Getting ready for RAGBRAI?
Me:  No, We are racing back to Grinnell.
Iowan: Grinnell? That’s like two hours by car from here.
Me:  Yeah it'll be a long night.
Iowan:  Well you must be doing pretty good because there are about 20 riders back in town and I aint seen no one since we left town till I saw you.
Me:  Well that’s good news
Iowan:  Yeah, But I think those riders are gay!
Me:  Probably, I mean they are all running around in tights like a bunch of those damn football players. (This obviously upset the local Iowan)
Iowan:  Yeah, well I think I'll stick to my four wheeler.  You have a good night.
Me:  You too thanks for stopping.
Posted by Davids1174 at 6:47 PM