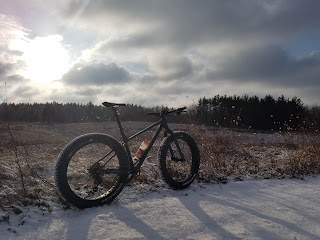 Saturday morning we received our first measurable snow of the year. Just in time for my first fat bike race of the season. The race was at Canopy Tours in Lake Geneva, nice and close to home. 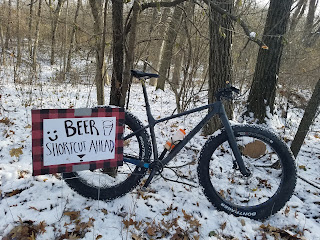 The course was pretty long compared to most of the Hugh Jass series. It is also tight and technical, so the fastest time of the day still only averaged 9 miles per hour. It sure felt like we rode a lot further than 12 miles.

There was a great turnout, around 150 riders. I got a good start, 4th into the woods behind Jason, Mike and Nick. Jason took off pretty hard on the first lap and made a gap, I hung back with Nick for a bit till he made a mistake and I went after Jason. Once I caught him I got the sense that he was probably resting a bit before I got there. I tried to ride past and leave him, but he didn't let me get away. We rode together for two laps, toward the end the trail started to wear down to a smooth icy surface and Jason was riding it better than me. He created a gap and got the win.

I was still pretty pumped with second in Elite, my teammate Bryan Scheel got second in the citizen class so the Bike Haven was well represented. It was a great time riding bikes.