I went for a ride today and saw a crow eating a dead crow. I thought to myself "that reminds me of our presidential candidates." I don't know how I got sucked into it, but lately I have been spending considerable amounts of time paying attention to politics. As sad as that is, I am happy to report that bikes are still cool.

I skipped the Eau Claire round because its a pretty far drive for me. Next was at Minooka Park, in Waukesha, WI. I showed up there with sore legs and it showed in my results with 24th overall in Cat1. It also showed in my training the following week. I felt horrible after that race.

The Midwest Mountain bike Championships is a 2 day event, so I packed up the family and all our camping gear and headed up. We got there and it rained for 6 hours straight. The race was a disaster anyway, but it didn't help that I missed my start. I considered skipping the race since I missed the start, but the way it works is you don't get any points for Sundays races if you don't race on Saturday. So I went out and suffered in the mud and rain for a couple hours and rolled in dead last.

I came back Sunday to blue skies and sunshine. The short track course dried up pretty nicely and was not a mudfest. It had some slick spots but that just kept it interesting. A short track race is very similar to cyclocross, and it is definitely short. 18 minutes of pain.

That was Sunday morning, in the afternoon we had the enduro. The idea of an enduro is a group ride to the top of the hill, then every 30 seconds a rider is sent barreling down. The shortest time to the bottom is the winner. It had rock gardens, some whoops, berms, stairs, single track, drop offs and other obstacles along the way. I had a really great time with this format of racing. There was a social aspect to it, as if we were all just hanging out. Once it is your turn to go down though, its balls to the wall.


Next race was in La Crosse, WI. I was debating on going because I am kind of a lazy turd and like races that are close to my house. I am glad I decided to go, that course was really great. You start off with about 3 miles of descending on a dirt road with heavy erosion. I honestly thought I was going as fast as I possibly could, and was fearing for my life, when David Carew passed me and several others like we were standing still. I can picture it perfectly in my mind, and I still don't understand how he didn't go flying into the trees.

After that long down hill we climb back up 2 miles of wide single track and hop out on a paved road. We take that back toward the start area and dive into the woods. This section was the tightest single track I have seen at a WORS event, very challenging at speed and all descending. Back up the hill again, this time with lots of spectators who were giving out marshmallow peanut hand ups. Then we head into some nice flowy single track. I don't know what my problem was in the flowy stuff but I lost time there every lap.

I was finally able to break the top 20 with a 16th overall in La Crosse, which was awesome considering I have been stuck at 21, 22, and 24 up till now. I am starting to get used to the new bike, but I don't feel like I am using it to its full potential yet. 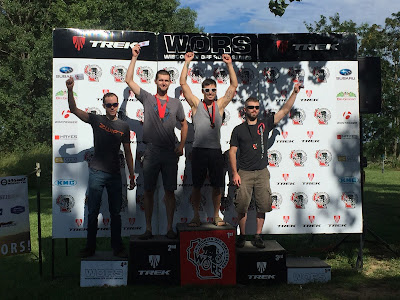 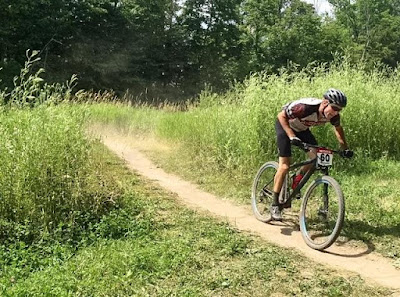 Next race is near Green Bay, WI. I may skip it depending on if I feel like making the 3 hour drive or not. I will for sure be at the Lake Geneva round September 11th. I hope to see you there.
Posted by Davids1174 at 7:28 PM