Over 100 people showed up to race the third round of the Hugh Jass Fatbike series. We finally got some snow to race to make it feel like a real fat bike race. I had never ridden the Alpha trails before, but they are worth checking out if you are in the area. We did 5 laps of the 3 mile loop, starting with a bomb run down the sledding hill, turn and come right back up to separate the field a bit.

There is a 3 way points battle for the series going on between Brad, Dave, and myself. I had been sick the week heading up to the race so I wasn't sure how things would go. It was my lucky day though, as we went into the first corner Brad and Dave got tangled up. Not bad enough to put anyone on the ground, but enough to lose momentum and a few positions. This allowed me to sneak away behind WORS pro Cole Haus and Cat 1 racer Randy Rollins.

They both took off and left me pretty easily. So my first lap was pretty easy, then on the second lap we got into lapped traffic. The Alpha trails are tight so passing is impossible unless the rider pulls to the side. This involved a lot of communication and patience but during a race patience is not always something I have a lot of.

Brad and Dave were able to move through the traffic better than I was and on the last lap were able to work right onto me. I turned it down a bit to recover knowing they wouldn't be able to pass on the single track. It would all come down to the last sprint up the sledding hill.

I gave it everything and it hurt pretty bad, but I was able to hold them off. That is the way it has worked out every race so far. None of us has won a race yet, but we always finish together and consistently in the top 5. It makes for a fun and exciting series.

My dad has been doing the series as well, and seems to be really enjoying himself, he finished 59th of 96 in the open men class. The promoters put on an event that is fun for all levels of skill and everyone is there to have a good time. 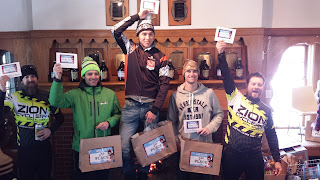 Next race is January 16th in Glendale, WI. Hope to see you there!