Whenever I choose a photo to put in my blog, I put it in a folder so it is easy to find when I need to upload it. This folder is creatively named "blog photos."

I was going through that folder tonight and noticed that most of those photos are from the "off-season" for riding bikes. Which makes sense, because Summer is such a busy time of year and I would rather be outside than on the computer anyway.

So I guess that would make this "blog season."

Started the weekend out on a mountain bike ride with Mike and Pat.  My kid, Evan, has been bugging me for sometime now to bring him along on these rides with Mike so I finally gave in and told him to come along.

I figured he would have the best time of his life, because that is what I do every time I get a leisure ride in the woods with friends. Unfortunately Evan is still getting used to his coaster brake. So when he gets freaked out on a downhill he takes his feet off the pedals and tries to stop with his feet, which doesn't work.

I have seen some pretty fast riders go through trails, but none as fast as my 4 year old that doesn't understand how to use his brakes. The speed he carried down the hill was incredible. I was so proud.

I just wish that tree hadn't gotten in his way and sent him flying through the air. He just clipped it with his right hand, which started a handlebar swap that no one could have recovered from.

Now Evan doesn't want to ride in the woods anymore... Hopefully he changes his mind by next weekend because I thought we had a great time.

After the bike riding, my wife and I did something we never do. We went out without the children.  Not by choice of course, we were invited by Brian and Janel to go see Larry the Cable Guy in Milwaukee. I did not know that we would also see Jeff Foxworthy there as well, which was awesome. These guys will have you laughing so hard you'd think you spent the night doing sit ups, because your sides are so sore.

Sunday I got out for a long one. My goal was to find a good route to my new job in Rockford, but after 88 miles of scouting I hadn't found anything I would recommend on a regular basis. In town isn't bad, because everyone is doing 35 and hitting stop lights. and 10 miles out of town is good too, because it's country roads. The dangerous part is the 45 mph zones in between, where there are no shoulders and everyone is doing 60 mph on an overpopulated two lane road.

For example look at the photo below, a 45 mph zone with a telephone pole broken in half and car parts 100 yds into the field.


Not ideal for riding bikes. Not 5 miles after taking this picture I was ran off the road by some bitch on a cell phone. That is another long story I am not ready to get into.

I am not writing off the bike to work idea just yet, I have a couple more ideas. For now though, I will be driving. 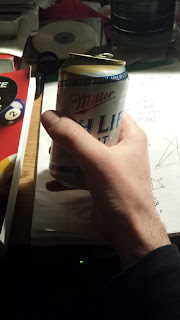 So here is to another season of base miles, cold weather, and good times.