The Chequamegon 100 – 100 mile single track mountain bike race, in Northern Wisconsin in the Chequamegon National Forest.  The course does not use the same trail twice, it is one giant 100 mile loop starting in Cable going east to Lake Namekagon , then south to Hayward and back north to Cable.  All the money from the registration goes back to the trails.


I showed up early to the pre-race meeting on Friday and went for a ride.  I had never ridden the area before and wanted to see what it was like.  I was running a 32:17 on the single speed, which is what I always run, but I heard a few people were running much lower.  After much thought I decided to switch to 32:18, and was very thankful that I did.


The trails on Friday were perfect, but rain was in the forecast overnight and when I woke up in the morning I was pretty pumped to see that it hadn’t rained.  We were staying about an hour away from the race, so Christina and I had to get up pretty early to get the kids up and moving. About 15 minutes before the start it started raining.  The rain would continue until 6 hours into the race. 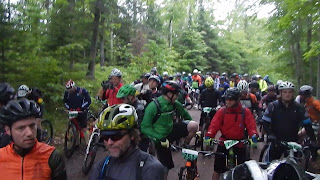 The start of the race is a roughly 3 mile gravel road to the single track.  This is great for guys on single speeds (sarcasm… as in “real fucking great”).  The trails were actually in really good shape at this point, muddy but “rideable.” The grime was quickly eating away brake pads and wearing out chains all over.


The forest roads that we used to connect sections of trail were awful, like quicksand. The roads were so soft you could count the number of riders ahead of you with the ruts they left behind. Getting back on the single track was so nice.


About 40 miles in, I made it to the HWY OO trail head where I planned to meet up with Christina in case I needed anything. I quickly filled my camel pack and grabbed an extra chain, some brake pads, and tools out of the tool box. At this point the trails had standing water and I knew it was going to be a “take care of the bike” kind of day. I wasn’t worried about the weight from the tools and chain; I just wanted to make sure I could keep the bike running. 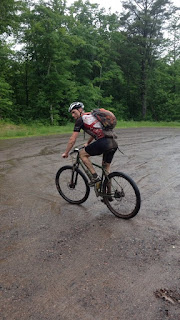 20 more miles of single track and we were in the Hayward area, where the drop bags were placed. This seemed to be the deciding point for most people. Many had already dropped and I saw others loading up bikes in cars here. Which is a bummer because the trails only got better from here, I feel like if you made it to the Hayward checkpoint @ 62 miles, you could have finished.  I distinctly remember the rain stopping and the sun peeking out at 5 hours and 56 minutes on the timer, and from that point the trails started to dry and get good.


I left the checkpoint with another rider and we rode the forest roads together for a while.  He was about 20 yards ahead of me when he slammed on his brakes and hollered “I just saw a bear cross the road!” “Do you think it’s safe to ride through?” I said “well, you have gears so he will eat me first!” and we rode on.  From this point I kinda don’t remember much of the race, I was hurting and riding alone so I just rode.


About 5 miles from the finish line Rick Blackford and Mike Curtes caught me.  They were also on single speeds, so we hop out of the woods for the last few miles of black top back to town.  We were spinning our brains out doing 19 mph, I couldn’t stop thinking “man I wish I would have left the 17 tooth on there!” We each took turns leading, but Rick wanted it the most and inched away from Mike and I.

I ended up 14th overall in 9 hours and 52 minutes, with half the field dropping out.  I went through three sets of brake pads, but the rest of the bike had no issues. A tough race in an awesome area, I really hope to get picked again in the lottery for next year. 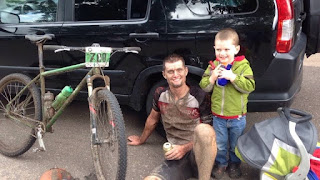