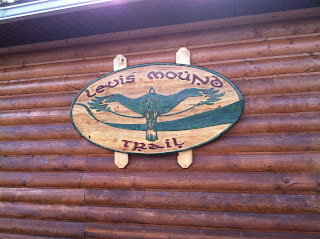 When driving up interstate 94 through Wisconsin you will notice that its basically flat land except for the occasional tall sandstone tower.  The Levis Mound Trail goes up and down one of those towers, it makes for some very tough biking conditions.  Long climbs and tricky descents with not much room for error.  The good stuff! 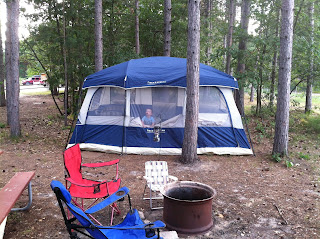 We got there early  Friday afternoon and set up camp, look close in the picture and you'll notice a goofball sending kisses to the camera.  I went and pre-rode the course which was awesome no doubt.  When I got back, Jason (race director) asked me to help setup an aid station. 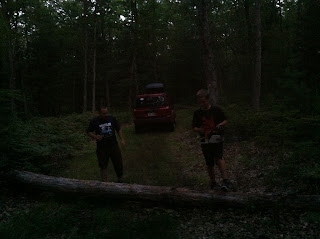 As we rode out in his lifted jeep to drop off the pop up tent and water coolers we drove over this fallen tree.  Then on the way back we drove over it again.  After driving over it twice we decided to... 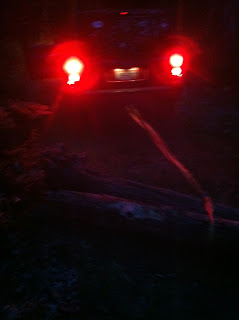 Haul it back as firewood for the community fire. 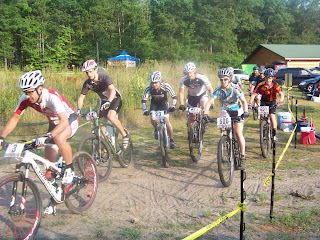 Then Saturday morning the race took off! #3 Lee Unwin took off with the lead and for most of the first lap I followed.

Toward the end of the first lap Lee missed a bridge and let me by but he stayed right on my rear tire the whole time.  I lead most of the second lap but crashed on a tricky climb and he went by.  He was nice about it though and waited for me to get back up, but I couldn't hold his pace any longer.  He left and I rode around the rest of the day in second place.

Then about 60 miles in I decided to quit.  I am still not really sure why, I could have finished if I wanted to, but I didn't feel like riding my bike anymore.  I was trashed, but third was way back so all I had to do was keep riding and get second.  At the pit stop before lap 5 little Evan came over and gave me a fresh water bottle,  I took it and did one more lap, but something about that little guy giving me the bottle made me not want to go out anymore.  So I quit and we packed up, went to dinner and got home early.  I train hard for these events, but for some reason at that moment spending time with family was more important than finishing second place.

Somewhere I read that it takes 3 years to get a "real" endurance built.  So I am hoping that next year I will be much stronger.  I know that I have improved greatly from last year but I am still not where I want to be.  I just gotta keep working.